Highlights from the Plodder Spring


Hi Plodders, it brings me great pleasure to bring you this update on such a fun-filled day!  But before coming to the sunny Sheffield half, I want to mention three plodders whose achievements have yet to be sung.

In chronological order first up is Martyn, who ran a fantastic Grindleford Gallop in 02:33:14 and finished in fifth place.


Next up is Andrew, who not content with achieving his own PB in the Gallop went on to run the Edale Skyline the very next day.  In his own words: "I thought I was dying".

And finally in Rhoda we have the year's first Plodder on a Podium! I'll let her say a bit about it:

With entries restricted to 60 the inaugural Bolton Abbey marathon organised by 'it's grim up north' was a low key, friendly event. Part of a weekend festival including 5k & 10k races and half, full & ultra marathons. The perfectly situated cafe was ideal for supporters to cheer runners on several times during the race whilst spending most of their time drinking tea/coffee in the warm. The beautiful setting of Bolton Abby, the river Wharfe and the surrounding sheep fields was stunning & meant that despite the marathon involving 3 laps it was far from boring. The weather was perfect running weather - cold but dry. Members of the public also enjoying the Bolton Abbey estate footpaths were very polite & encouraging to runners & the atmosphere was friendly & fun. The small numbers and undulating trail meant that the not so impressive sounding time of 4:05 gave me a First Lady trophy! The post race fruit cake was good too! If they do it again next year it'd be a great fun weekend out for plodders so let's all go & have some fun running & cheering each other along.


(We've also had other fun at Hope Winter Fell Race and a dazzling day at Wolf's Pit, but it's 11pm so I'm going to skip those)

On to today's Yorkshire-but-we-all-know-it's-really-Sheffield Half Marathon:

Standing in the start press, shoulder-to-shoulder with 5948 other people, I listened to the disembodied voice of an overly-enthusiastic woman repeatedly counting down from 3 and telling us to lunge.  This led to several false starts and some unwelcome body contact.  Now I don't do many road races so I can only assume this routine was intended to make us relieved, when we were eventually released, to be racing up a 5.4 mile hill and back down again.  It worked, as these happy Plodders show: 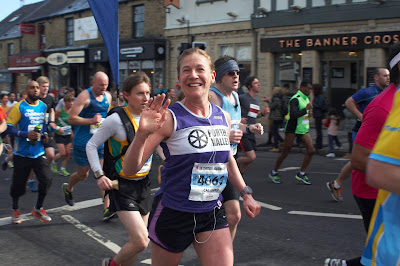 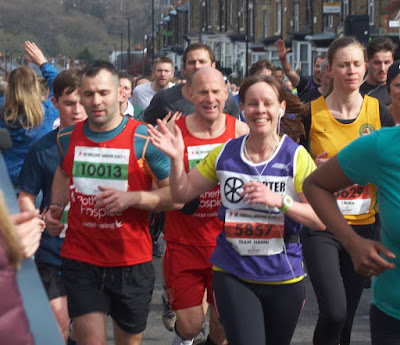 Once underway, the rest of the race was fantastic.  I can't say the hill was easy, but it certainly wasn't as much of a drag as I had anticipated.  On a calm sunny day a traffic-free Ringinglow Road was a lovely ridge run out to the edge of the Peak District.  Keeping the pace up on the long way back was pretty tough - fortunately I had some extra-fermented out-of-date energy gel to keep me going, courtesy of Cal.  I'm still getting intermittent palpitations.

More photos of Plodders on the way back down: 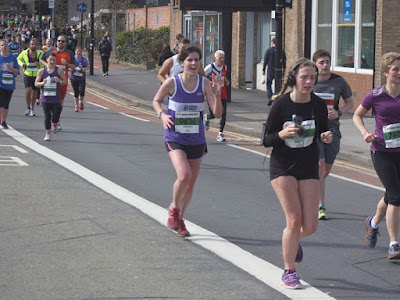 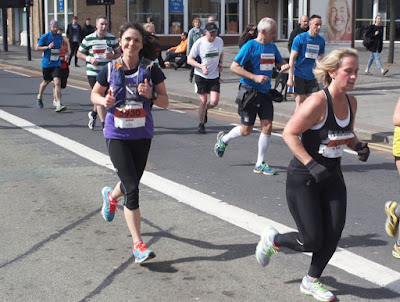 There were some great scores on the doors, with PBs for Cal, Mandy, David, Charlie, Martyn, Hannah, Kate, Steve, Kev, Helen and Tonks.  Sophie also ran her debut Half in 02:05:00, which she was thrilled with largely because it's a nice neat number.  With so many runners and no facility to search the results by affiliation, I'm afraid I can't bring you the full list - if I've missed anyone let me know.

But what absolutely made the day for everyone was the amount of support along the way.  Thank you to Julian, Lex & family, Colin, Rob, Andrew, Claire, and everyone else who turned out to shout "come on Porter Valley!"  In a fell run you're generally considered lucky if a scowling farmer leaning on a nearby gatepost nods at you.  This was completely different: the atmosphere at Ringinglow and then on the way down through Whirlow, Silver Hill, Banner Cross and Hunters Bar was phenomenal.

So well done to everyone - it's been an excellent start to the year.  But now it's April, and I'll race you to the hills...let the fell running commence!
Posted by Unknown at 23:13