Hello plod fans, I've got many and varied activities from the Plodders in this update.  Well, actually not that varied: it's all running.


Long and Half Tours of Bradwell

First up are the Bradwell races.  Martyn, Rhoda and the Plogger competed in the full tour (33 miles, 6300 feet ascent) and Maeve, Andrew, Sam B, Sam C and Susan all did the half tour (16 miles, 3000 feet).  The routes were both excellent, covering well-known Peakland favourite spots as well as some surprising nooks of the Hope valley.

It was a very hot day and in the 9am sun we were all perspiring extravagantly; fortunately it clouded over after a couple of hours and a light breeze made conditions more comfortable.  The Plogger started far too fast (I should have known since I was running with Martyn) and consequently what was intended to be a fun summer amble turned into a hellish ordeal of nausea and collisions with trees.  Purple kudos to Sam B who was recovering from a recent injury: it's great to have you back running again, Sam!

This is what Rhoda made of it:

With a warm & sunny forecast we stocked up on sun cream, sun hats, water & electrolytes. Registration was made more fun by a reunion with our long lost club founder, Simon, who was running the half. After a final failed attempt to persuade halfers to upgrade to the long tour, Martyn, Tonks & Rhoda set of for the long tour start. The half tour start followed half an hour later with Andrew, Sam B, Sam C, Maeve & Susan running.

The stunning views all the way round rewarded our efforts in climbing. The morning started with a long slog up behind the quarry the the steep decent of Cave Dale which was wet & slippy even on the sunny August day. Up to this point Martyn & Tonks kept up with one of the fastest in the field but regretted their speedy start later. We then went through Castleton & up to Back Tor. The long tour route also took in Hollins Cross, down to Edale, up Ringing Roger, down again & then up Back Tor.

From there we ran along the ridge to Loose Hill & down into Hope. Here Sam B retired abandoning Andrew who he'd been running with up to then to struggle on alone. Sam B's major achievement was getting to the start line after his accident. It's great to see him running again & we're all impressed with his brave recovery.

Those of us still running pressed on from Hope up part of Win Hill, down to Ladybower & along the Thornhill trail. This stretch involved some crossover between long & half tour runners & the temptation for long tour runners to return to Bradwell with the half tour. But the long tour runners were not much more than half way round when the half tour plodders finished with some impressive times & rankings. Simon was 8th & Andrew 19th. Maeve was 9th women with Susan not far behind & Sam C safely round in good time too.

Whilst they relaxed at the finish, 3 plodders plodded on in the long tour. Up from Bamford to Stanage & Burbage challenged our physical & mental strength. Tonks considered retiring but pushed on. Rhoda teamed up with another runner (Steve) for moral support. We were all encouraged by the support of the marshals at Burbage. On down to Padley gorge & along the River to Leadmill brought us to the final manned check point. Here the radio football news & lots of squash helped keep dehydration at bay before we pressed on to Abney. Up from Abney along the track over the moor was a slow plod for tired legs despite the relatively flat terrain. The view from the top of Bradwell edge was as welcome as it was beautiful. The steep drop was straight down once we managed to ignore the tape left over from a previous race enticing us back up the hill. Finally we ran down through Bradwell to the finish where we were greeted with cups of tea & soup & joined the happy tired finishers.

Martin came 7th despite over stretching himself at the beginning. Tonks finished 22nd after what he called the toughest race of his life. But how many other new doctors ran a 33 mile ultra at the end of their first week at work? Rhoda finished 38th (8th woman). Impressive running all round. So who's joining us next year?


Scores on the doors: 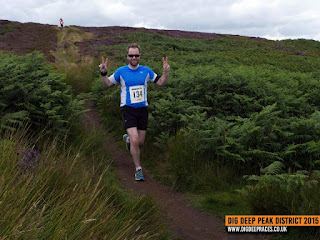 Last up is this old chestnut, although once more we were a bit thinner on the ground than previously: the question on everybody's lips was "where are the plodders?"  Well, Martyn was back to defend his title as the reining champion.  I don't think he managed this, but frankly that's probably a good thing because after his BGR success this summer winning the marathon again would have looked a bit keen.

In the next Plog you can look forward to hearing about how two purple demons took on a race described by Steve Franklin as "the race with the highest chance of dying I've ever done": the Salomon Glencoe Skyline.  Also, the heather's starting to bloom so the moors will be wearing our colour.